How Pace Verso Is Weathering The Crypto Winter Last November, Pace Gallery unveiled Pace Verso, becoming one of the first galleries to establish a dedicated NFT platform. Though for Ariel Hudes, Head of Pace Verso, she’d rather view it less as a “platform” than a “hub.” Her reasoning: “We found quickly that our artists who want to do projects in the space do not want to make art that fits into a templated platform. They want to do projects that in most cases are highly customized.”

Hudes was speaking at Fuelarts’ most recent weekly webinar on August 11, at which she emphasized Pace Verso’s artist-first approach to building its Web3 ecosystem. “We follow the artists,” she said. However these artists plan to shape or launch their Web3 or digital projects — whether with custom websites, smart contracts, or community outreach — it’s been the platform’s (or hub’s) remit to facilitate these creations on a one-to-one basis. Not the most scalable model, Hudes recognizes, but one that has so far bode well for the Pace brand and its collectors. Less than a year on from its debut, Pace Verso has overseen “a conglomeration of projects,” in her words, by the likes of Glenn Kaino, Urs Fischer, and DRIFT, while embarking on a partnership with Art Blocks. She also teases a busy fall season as the platform shifts out of “quiet growth mode” to present a consistent flow of projects. But what does it mean to run a NFT hub in the midst of a crypto slump? And how are artists and collectors responding to digital art this far along into a post-Beeple world? Here are Hudes’ insights from Fuelarts’ virtual event. 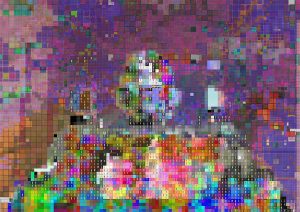 According to Hudes, while Pace’s stable of artists (Zhang Huan, Jeff Koons, Lucas Samaras) has been largely open to the prospect of working with Web3 tools, collectors remain “a mixed bag.” There’s yet to be a meeting of traditional and digital collectors, much less a migration, especially as the crypto art world might be alien to traditional collectors, and vice versa. “People feel so intimidated by terms that they don’t know that they just don’t want to get into the space at all,” she said. “If you lower that barrier, then I think more people would be exploring.”

But there’s way more skepticism across the broader art establishment, Hudes found. Pace’s peers and competitors, she said, “really decided not to enter the space and some of them have been very direct about not respecting the space.” It might be down to fear or hesitancy when it comes to change, but also, more pragmatically, most galleries do not have the resources to make the move into Web3 that Pace has. “If your team is made up of only sales dealers, you don’t really have the right team to explore partnerships, negotiate contracts, and put these things in place,” she said.

The aforementioned resources should of course also include technological expertise. Currently, Pace Verso outsources its technical tasks on a project-by-project basis. “Every time an artist comes to us with a project, we source a custom team for them,” said Hudes. “We find the right people to engineer it or to write the smart contracts, whatever needs to be done.” But to produce these projects more nimbly and at scale, she sees the need for in-house technical capabilities or strong partnerships to support the delivery of Web3 content at a high level. The crypto winter is upon us: cryptocurrencies have cooled, just as NFT trading has plateaued. Is Pace worried? Not one bit; in fact, as Hudes plainly put it, “For Pace Verso, this is the best thing that could have happened.” Like most art and artist-first ventures, the platform sees how the current crypto bear market could remove speculation from the NFT equation, specifically the kind of speculative trading that has spawned cash grabs, encouraged flipping, and generated cackly media coverage.

With the bubble popping (ish), “what’s replaced it is an interest in buying capital-A art that holds its value,” said Hudes. For the platform, that has meant an opportunity to sell work at higher prices, while opening the door for artists to focus on creating smaller series or collections of 1/1s. “There’s renewed interest in that,” she said. “It feels more like you’re buying an artwork.”